*Spoiler Alert* (also, get with the program and watch this show in real-time like the rest of us, lol.)

For lack of better terms I love that #insecurehbo shows women getting eaten out so openly bc for years you see men getting their dicks sucked on TV left and right . I love the role reversal 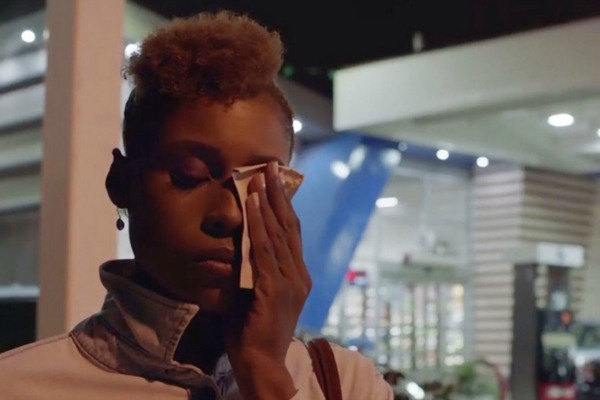 I don’t think I’ll be doing these re-caps weekly (we have Luuvie Ajayi and Insecuritea for that).  But, in a nutshell here’s what I thought of Episode 3:

But I especially wanted to talk about this past episode because it gave perfect examples of the destructive nature of toxic masculinity and the clarity of continued consent.

Love this scene for its example of continued consent. #EastCoast #InsecureHBO

Look at that lesson on consent being withdrawn, and respected, in the act. #insecurehbo

In the age of #MeToo and #TimesUp, I am here for this.  And I realize that many people still don’t know what is meant by “toxic masculinity” or “continued consent.”

On continued consent, in the last scene, Daniel and Issa were in the bed that they have been sharing (Gurrrrrrrrrrl. Get your own bed! Weak neck my arse).

Daniel started to kiss Issa.  She seemed to enjoy it.  He then moved downwards and pulled down her pants and started to perform oral sex.  When Issa stopped being responsive, he looked up and realized that she wasn’t enjoying it.  Issa confirmed this and said, “I can’t do this. Just doesn’t feel right.”  Daniel, surprisingly, even though he is toxic masculinity personified, didn’t protest, didn’t continue to force himself, but instead he said, “Yeah,” and rolled over.

That, my friends, is what we mean by continued, enthusiastic consent.  Issa withdrew her consent.  She did not give continued consent to what Daniel was doing.  Consent should be enthusiastic and continued and consistent throughout the sexual act.  Consent can be given AND can be subsequently withdrawn and that’s okay.  You can be okay with the foreplay but not okay with anything afterwards.  You may not even be okay with the play.  You can go all the way (heyyyy! You see how I’m rhyming here?  Issa ain’t got nothing on me) to the point where he is inside of and/or on top of you.  But as soon as you say no, it’s gotta end.  He needs to pull out. He needs to stop. You can say no, just like Issa. And “no” is said in many ways: “No” may sound like unresponsiveness, or silence, or hesitance or “I can’t” or “This doesn’t feel right.” That’s still no.  No means no.  No means stop. However you say it, whenever you say it, it must be heard and respected. And not only is that okay — it’s ethical and legally mandated.

Toxic masculinity permits the male subject to bask in his entitlement and have the great privilege of not having to care about the comfort of the other party (“real men aren’t empathetic or show emotion”).  Women also don’t have to care and don’t have to play along, but we often do in order to keep our jobs and save our lives.  For women, it’s about self-preservation.

In case I was somehow unclear, some examples of toxic masculinity include:

In this episode though, Daniel gives us great examples in action:

Daniel was all down for being captain save a hoe until Issa didn’t validate his feelings the way he wanted. Now it’s “I always have to save you.” Nigga, YOU asked her to stay! #InsecureHBO

Daniel’s ego. Then degradation of Issa, whose in a vulnerable place. Then trying to apologize with sex. Toxic masculinity at its finest. #InsecureHBO

News at 11: Man Tries To Apologize with Sex Instead of Using His Words. #ByeDaniel #EastCoast #InsecureHBO

But all is not lost. Toxic masculinity can be unlearned; consent can be taught (unless you are a student in Ontario — that’s another story).  People are allowed to change and evolve and develop, and that continues to be my hope for Issa, Daniel, Molly, DRO (!!!!!!) and the rest of us.